Bungalows for sale in Torrevieja near the Beach

New Bungalows Mirasal for sale in Torrevieja near the beach and all amenities. Starting from 2-3 bedrooms, as well as a garage space and storage for each bungalow. Also available bungalows with a garden and solarium area. Torrevieja is a city located opposite the Mediterranean Sea and is located between the coastal municipalities of Guardamar del Segura and Orihuela. Belonging to the southern coast of the Costa Blanca, Torrevieja has more than 100,000 inhabitants, being one of the most tourist and important populations of the province of Alicante. With 20 kilometers of coastline, Torrevieja has such outstanding beaches as, Punta Prima, La Mata, Los Locos, El Cura, El Acequión or Los Náufragos and enjoys a pleasant average temperature of 18º, exceeding 20º in spring and autumn and reaching 30º during the summer months.

Torrevieja has one of the best sanitary coverage due to the important health value for the large resident community coming from Europe and other areas abroad. We can find the University Hospital of Torrevieja and Hospital Quirón, among others. The city also has more than 15 primary schools and colleges. From the cultural point of view, the International Contest of Habaneras and Polyphony of Torrevieja since 1955 and more than 14 municipal celebrations throughout the year that make it a very attractive city for tourism is of international tourist interest. The city is very well connected, just 20 minutes from San Javier-Murcia Airport and 50 minutes from Alicante International Airport.

* Offers and prices are subject to availability and the final decision of the owner. The descriptive data offered on the web are purely for information and non-contractual. Any request for reservation / purchase of a property will be based on the data that finally appears in the Land Registry.
General Information Equipment Features
Type:
Bungalow
Town:
Torrevieja
Build size:
71 m²
Useful (m2):
71 m²
Terrace:
17 m²
Bedrooms:
2
Bathrooms:
2
Lounge:
1
Dining room:
1
Kitchen:
1 Kitchen
Built in:
2019
Air conditioning:
Air conditioning
Furniture:
Not included
Construction type:
Modern
Distance to sea:
3
Distance to services:
3
Distance to town centre:
3

This incredible development resort ‘Laguna Beach’ include 64 bungalows which consists of 2 bedrooms, 2 bathrooms and an ...

Torrevieja is a city located opposite the Mediterranean Sea and is located between the coastal municipalities of Guardam... 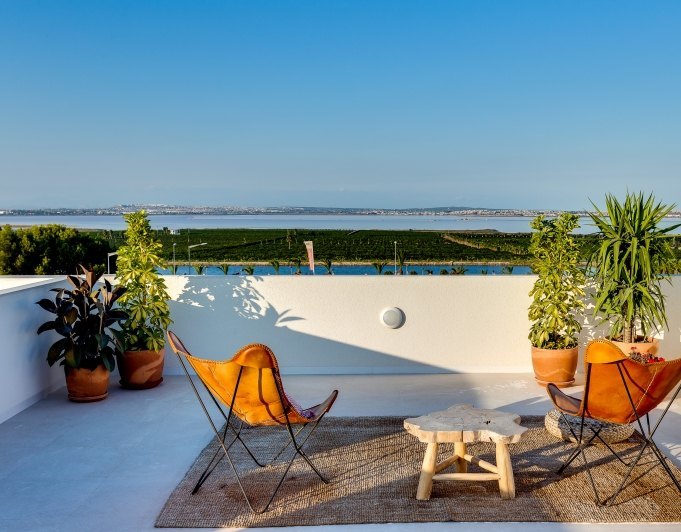